When is the AGA man not the AGA man? Answer = never, although I’m not complaining!

There was no AGA involvement at Umberleigh and this was a day out to enjoy the end of season party atmosphere, chat (lots), take photos, and yes, enjoy a drink or two. All of that was achieved and we thoroughly enjoyed the day, but I must admit that I wasn’t expecting the welcome we received, it was amazing! 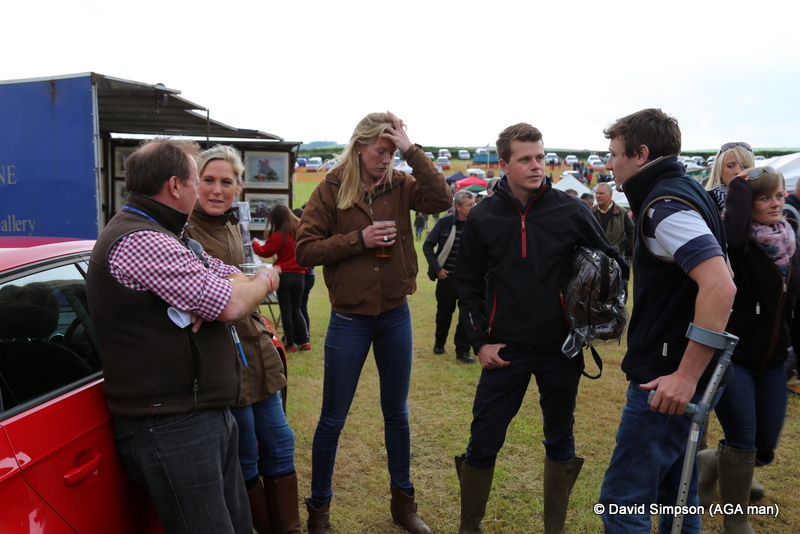 We’ve not been to the Devon & Cornwall Point-to-Point area this season, but you could feel the love for the AGA sponsorship on Saturday and we both felt rather special. Gillian Underhill, Lee Glanville and Donna Harris deserve a special mention and it’s nice to have a platform where I can thank them publicly.

Not sure what Jan Mathias (right) is saying to Judith Healey but it looks like Jim Squires is grimacing!

There were plenty of visitors from the Midland areas and all that was missing was a little bit of sunshine!

Maurice Thomas (left) provided the first refreshment of the day, at precisely 12:16 pm!

A very respectable second place for Bay To Go (Hannah Watson) was Heather Kemp’s last runner as a trainer (‘Never In Total Control’)… will she be back and will she ever be in total control?

Hannah, Bay To Go and Heather

The beer tent is not somewhere you would normally find the AGA man at a point-to-point, but this was a day off so Alan Hill, Neil Astor and Luke Wheeler dragged me in there kicking and screaming (yes, really!). I couldn’t have asked for three better (or more entertaining) companions and when we were joined by Laura Thomas, Charlie Brown, Andrew Hickman and Tom Ellis the writing looked like it could be on the wall! 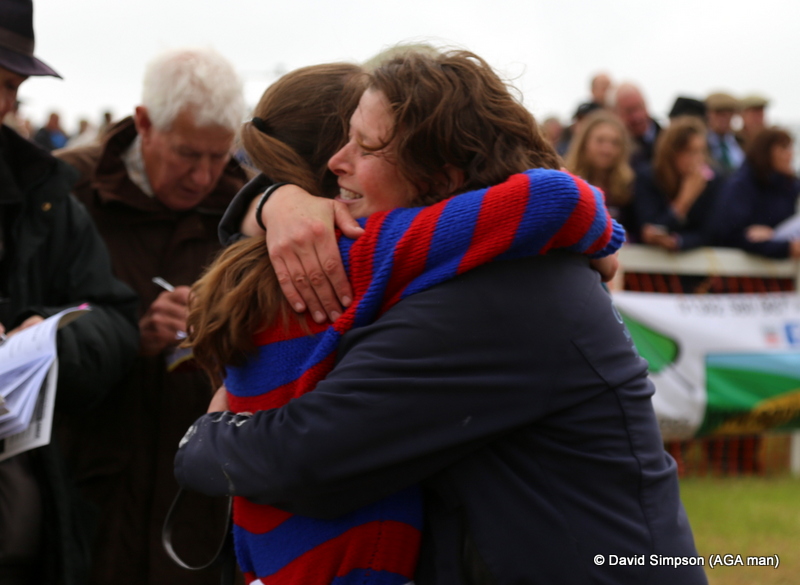 Florence Mary looks rather pleased with herself!

Pleased to say that I emerged unscathed, just in time for the ladies open, although the next G&T was only a whisker away! 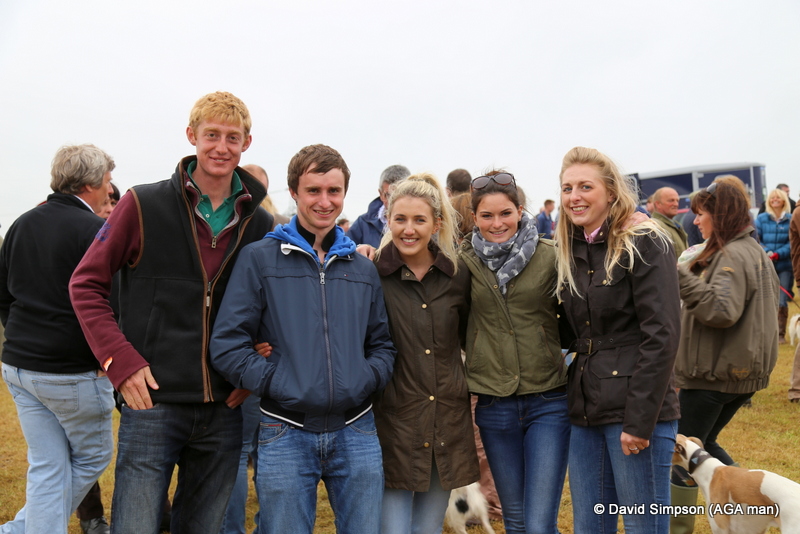 Not for the first time this season, Jack Barber finds himself in front of the AGA man’s camera! 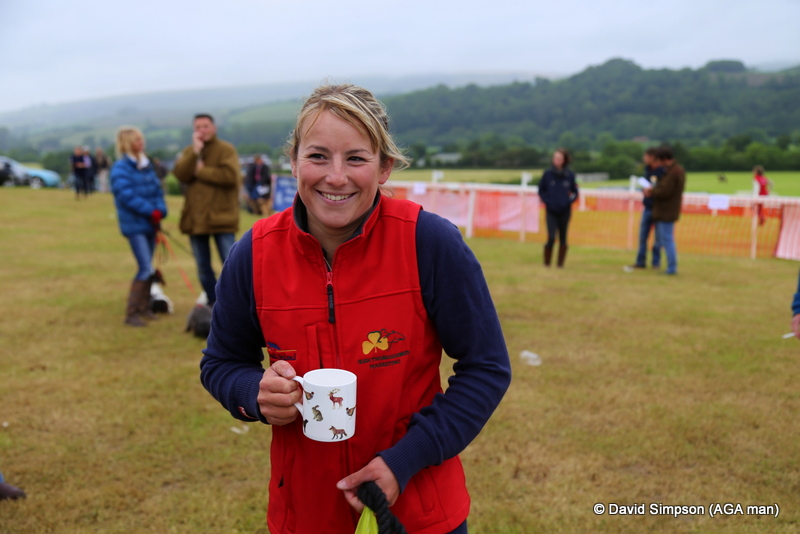 Sometimes you just happen to be in the right place at the right time and something really good happens. Well, that was the case today as Olly Greenall bowed out out with a winner on his last ever point-to-point ride and I managed to get some decent photos (along with a little video clip).

A proud dad moment for Peter with his son, Olly

We’ve seen this for the last time… 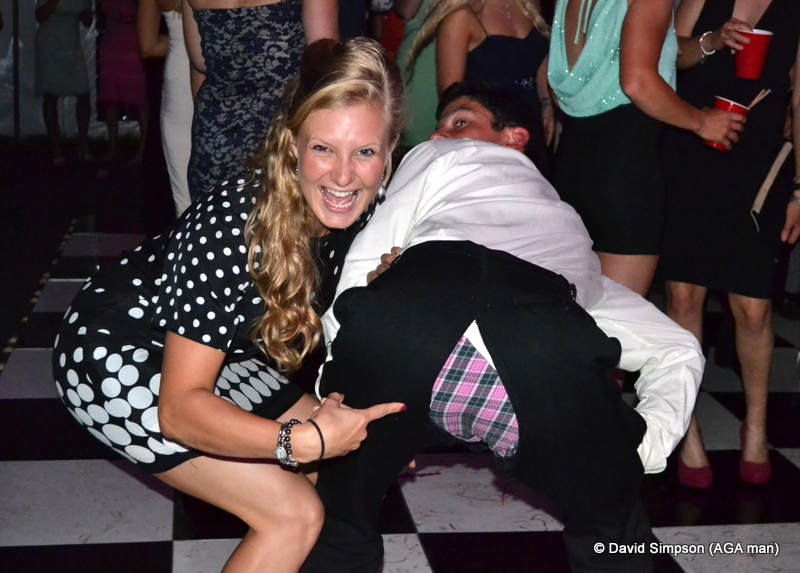 Len Vickery (centre) was in the thick of the celebrations

Is Tom offereing his drink to Olly?

The boys – led by John Mathias – decided that Olly needed to cool down! 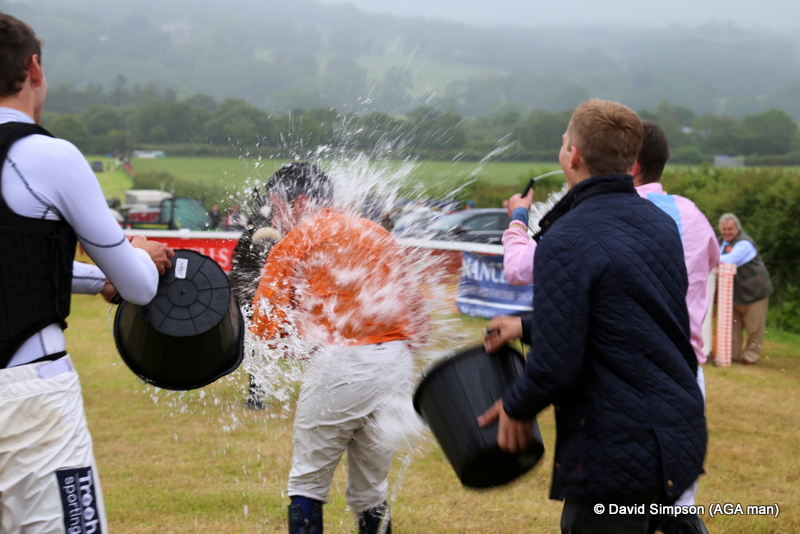 One bucket was not enough 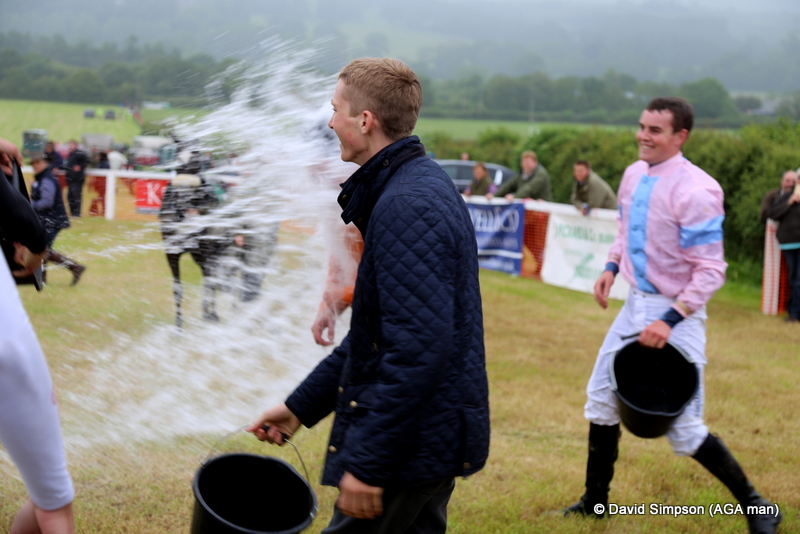 Robbie Henderson announced his retirement from the saddle after Bratton Down the previous weekend, and it was great to see him today, and to wish him the very best of luck for the future. He’s a character and I like him. Read about Robbie’s retirement here.

Robbie was also pleased to be there to celebrate with Olly! 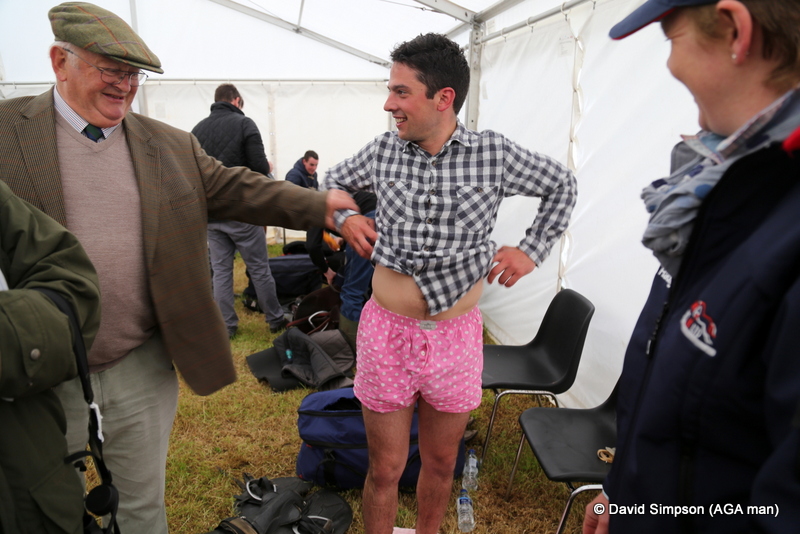 Sorry Olly, Len Vickery made me take this picture, “get a picture of these ‘ere pink pants”, he said, then turned to Biddick and said, “I bet e haven’t got a pair of these” (it sounds much better when you hear Len say it) 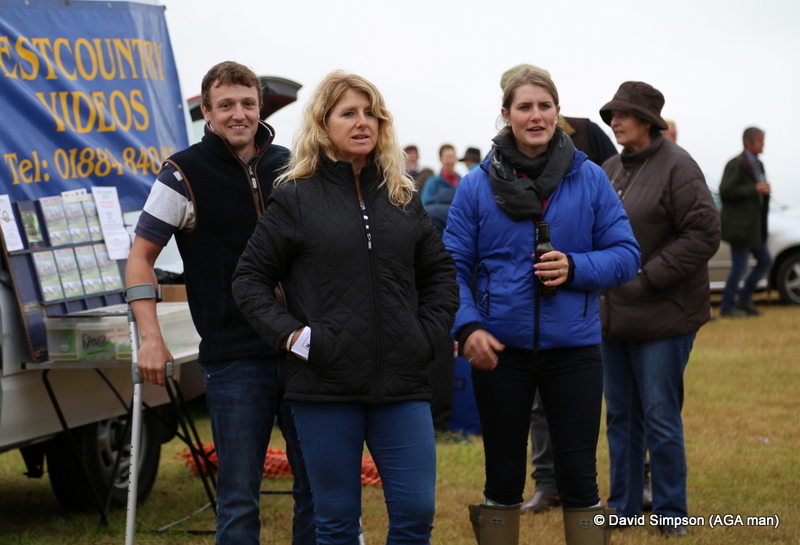 Tom looking very suspicious behind Lawney Hill, not long after this was taken he waved at me!

Here’s one for the scrapbook, the Greenall boys are flanked by Robbie and Will

Boys will be boys!

These three have ridden some winners between them! 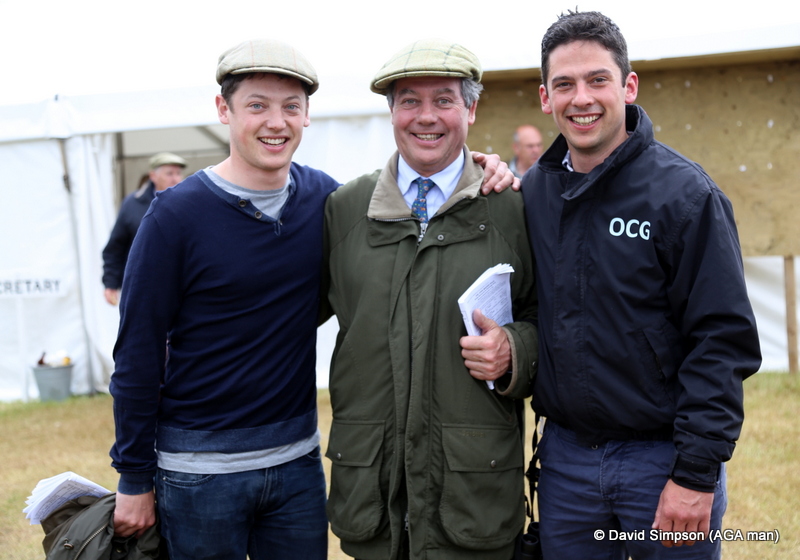 Another one for the scrapbook as dad joins his boys 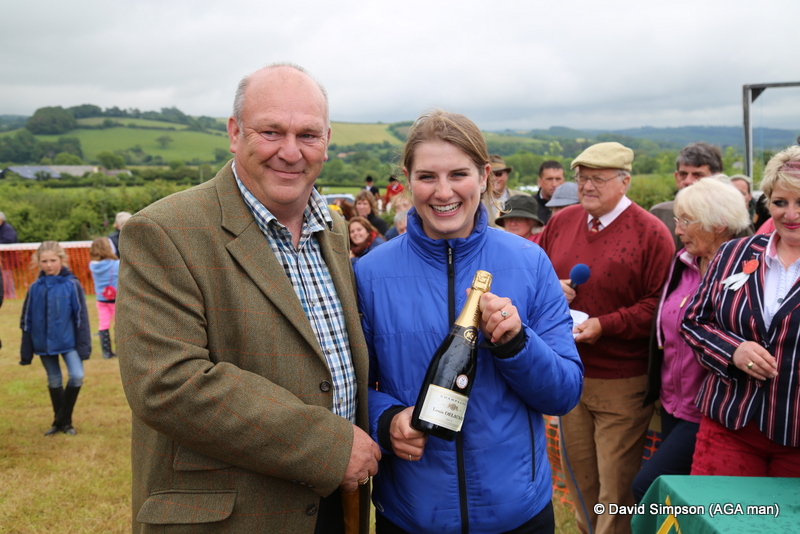 Gina, just before she took off across the paddock, pursued by Hannah Watson with a champagne bottle!

A rather wet national champion 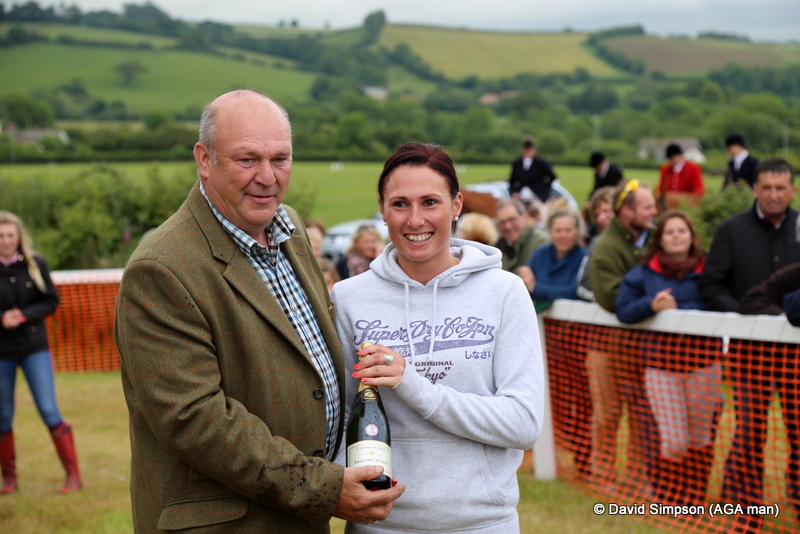 Leanda Tickle receives her area award, and we know what’s coming next…

And he gets it as well!

Billy Widdick decides to join in! 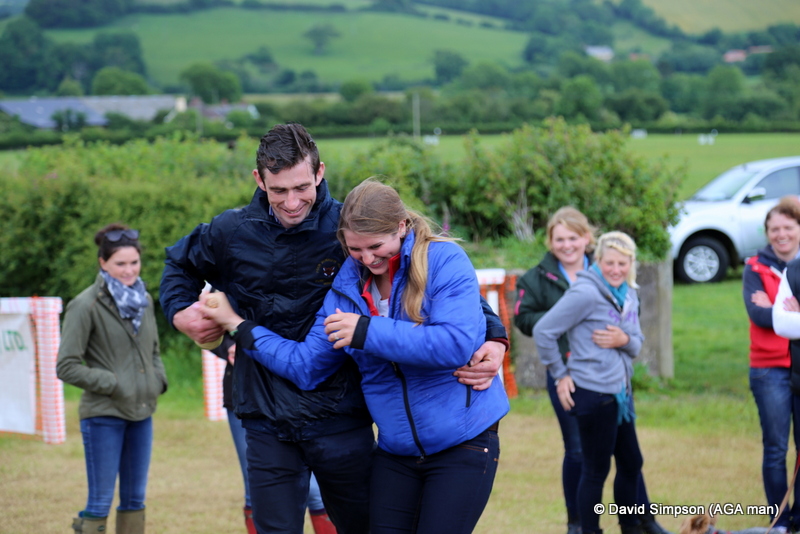 Our champions grapple, we know what will happen to the loser… 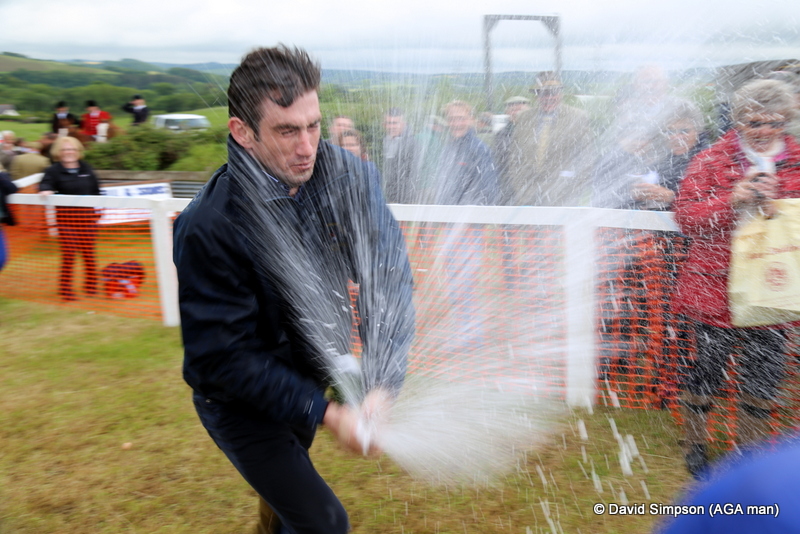 Looks like Will was the winner… although my camera was also in the line of fire! 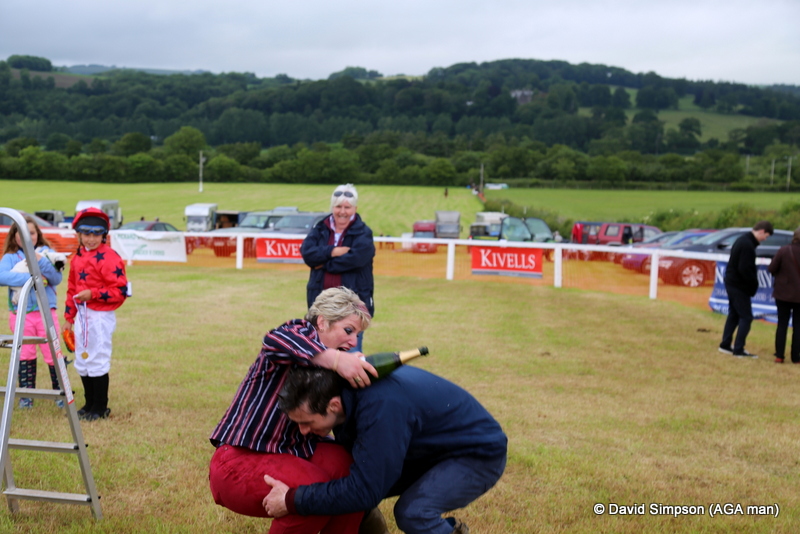 Will decides that the secretary should join in the fun!

It’s safer down there! 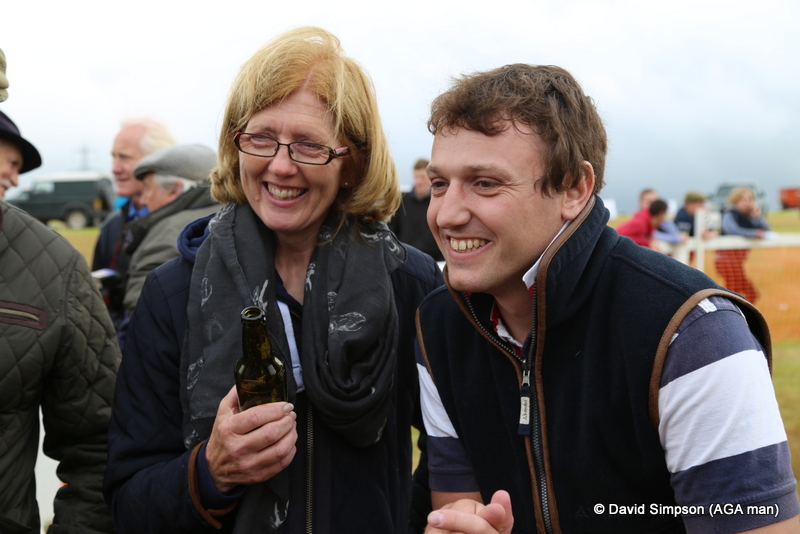 Lets see whether Thomas dares to crack any mother-in-law jokes! (well, this time next week Joanna Andrews will have that title!) 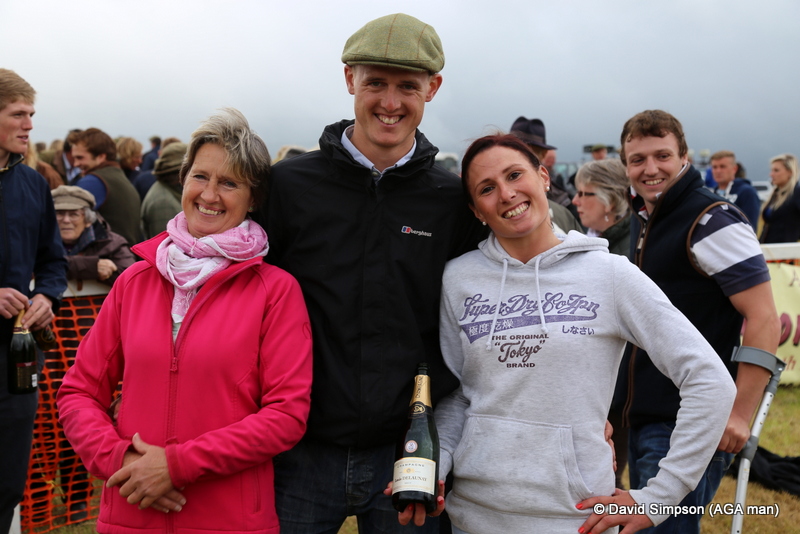 The Tickle family (Sarah, Joe & Leanda), another pic that has made the cut for this weeks Been Pointing!

The drizzle put paid to any prolonged post race festivities (the cooler than normal temperature also played a part) and that was the only disappointing part of what was an enjoyable day. The children (and some of the grown-ups!) all headed for the Black Cock Inn to party into the early hours, but I was reminded that I was “50, not 20” so me and Mrs S made a graceful retreat and headed off to Treyhill Farm for our first ever glamping experience! 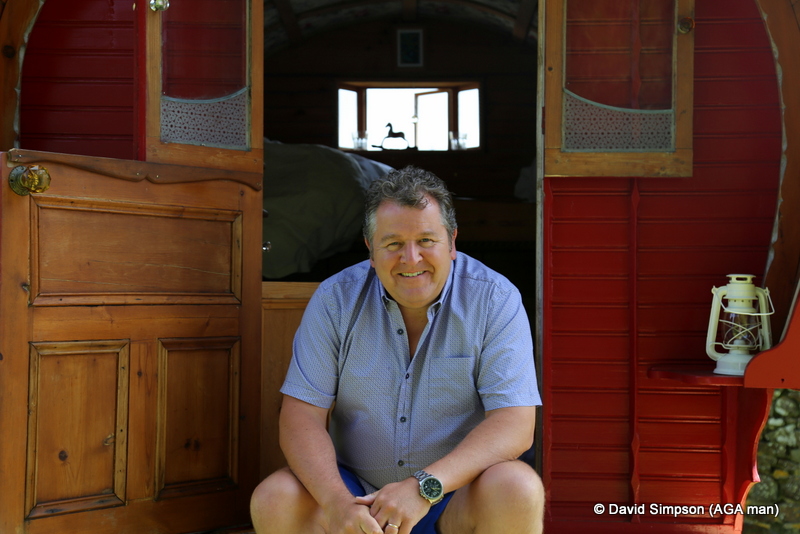 Looking quite refreshed after my night in ‘Bill’s Bowtop‘, a lot more refreshed than the happy campers who had attended the post race party! 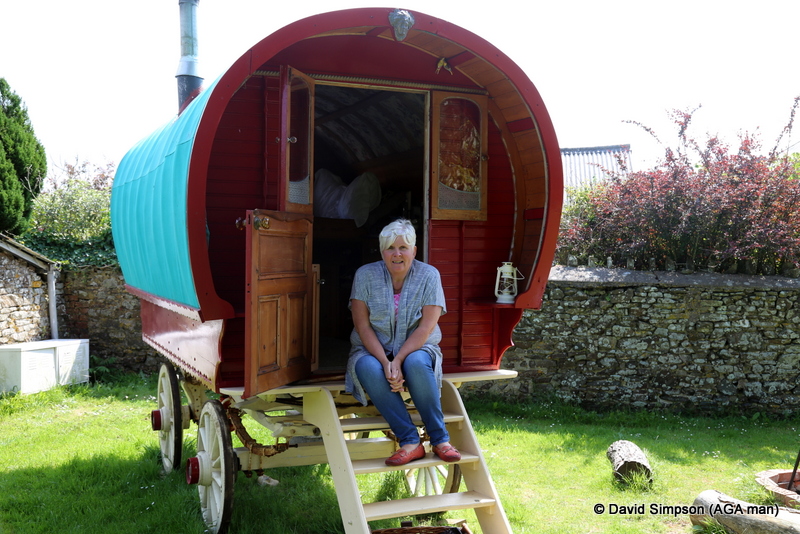 As you can see from the photos our home for the evening was a gypsy caravan, a very comfy one I might add, and we woke up feeling very refreshed. As much as I hate missing a good party, I think we definitely made the right choice. The welcome upon arrival was as friendly as the one we had received earlier in the day (thank you, Chloe), and the selection of home made cakes, plus a cracking cheese platter, was the icing on the cake. 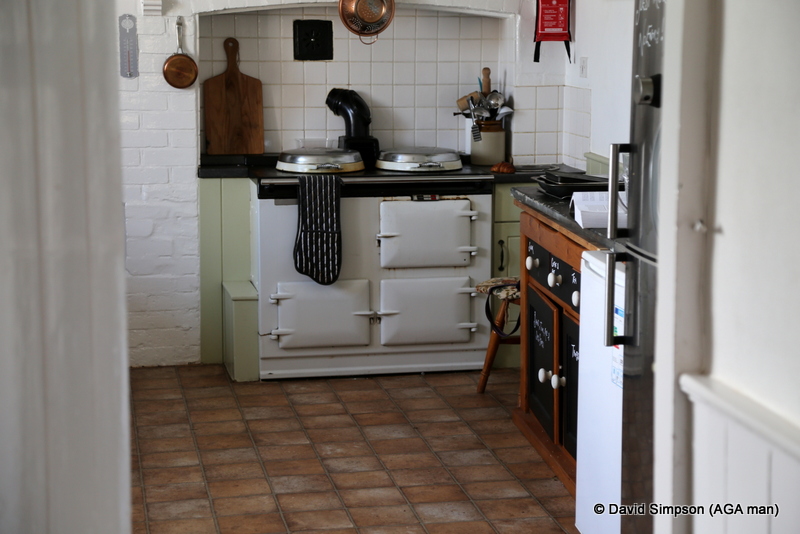 Fancy an AGA cooked breakfast? Oh go on then!

The wood burner in Bill’s Bowtop kept the chill off during the night and we were up and about early, feeling very refreshed. An AGA cooked breakfast was the perfect way to start the day (what else for the AGA man?) and this was accompanied by home made granola and Pain au chocolat. We really were in no hurry to leave – especially when we met the collie pups – but the sun was shining so we headed off to Westward Ho! for a nice stroll along the sea front (we may also have had ice cream and fish n chips!).

Back to AGA business today but with a spring in my step after a splendid weekend. A massive thank you to Emma, Tim and Chloe, we really loved our glamping experience and your friendly welcome, and we’ll definitely be back for more soon. I’d also like to say a huge thank you to everyone from the Devon & Cornwall Point-to-Point Area for looking after us at Umberleigh, we’ll be back to see you all soon as well!