Freelance amateur photographer, also work part-time at G&T Racing. Durham born & bred, support Sunderland AFC. I started taking pics as a hobby while managing an amateur horse racing sponsorship project for AGA and realised that my images gave me a means to tell a story, on social media and in my blog. Many times I was told that I had an eye for a good pic, coupled with a knack of being in the right place at the right time, so I decided to do something about it. I hope you enjoy the pics! Formerly known as the AGA man, love life, good food, travel, wine, gin & selfies. Also invented the AGA hat!

What a day at Chaddesley Corbett, an eagerly awaited phone call just before 8am confirmed that all was good, and that despite the storm that had raged through the night we were fit to race! Our legions of twitter and facebook followers were quickly informed, the point-to-point forum was updated, and with the word well and truly spread we were soon in the car and on our way.

Glorious sunshine greeted us as we arrived, but it was a touch muddy underfoot, and a stiff breeze was blowing across the course.  Still, there were plenty of smiles and the season at Chaddesley was soon underway with the first of seven very competitive races, although a piece of dodgy parking would come back to haunt us later in the day!

There are 5 fabulous photos in this update – including the one above – which have been kindly provided by Al Johnston Photography, and I can recommend that you take a look at his facebook page, and his website – thanks Al!

The first race was won by Welsh raider Silver Token, piloted by Charly Prichard, who finished 6th in the AGA Championship last season, and is available at 14/1 to win it this time around. Not long after the post race presentation the heavens opened, but it was only a passing shower and the sun soon returned. Mrs S had scampered back to the car as the first rain drops fell, but unlike the sun she did not return!

The wind was biting but the action on the track was hot and we saw another winner with strong AGA connections in the next race – the Harkaway Club Members Restricted – Ruth Tutton-Cook.

The photo above was going to be accompanied by a witty caption until I remembered that I would be seeing these three lovely ladies at the next Harkaway Committee meeting!

The AGA ladies series was due to get underway at Cottenham in two days time so as you would expect I was particularly interested in the ladies open. Despite saying that the race looked too competitive to call I decided to have a little punt on Berties Dream just before the off and I used one of the Scottish notes that I had won in Alnwick.

The very colourful and slightly foreign looking Scottish note caused a bit of consternation on the George Moir joint but it was soon tucked away in the satchel, and I offered to have it back if my bet was a winner! It wasn’t, but I had a good run for my money.

John Willis can rightly lay claim to being one of the best course announcers in the country and he did a splendid job again today.

Robbie Henderson bagged the mens open, and there were also wins for Annie Dalton, Paddy Gerety & Rachel Leyshon, with the girls coming out on top on the day with a total of 5 wins, the boys had 2.

The rain returned with a vengeance during the Members Non-Rules Runners Maiden, accompanied by a pretty fierce hail storm. But I have a confession to make, due to a long standing Christmas lunch date, and a Pointing Plus deadline to meet, the AGA man and Mrs S were on the M5 when the hail really came down, having scooted out of the bottom gate as Annie Dalton crossed the line!

I’d like to apologise to my fellow committee members for not sticking it out to the bitter end, it had nothing to do with the weather! I’m also dismayed that I wasn’t around to welcome Annie, Paddy & Rachel back to the winners enclosure! 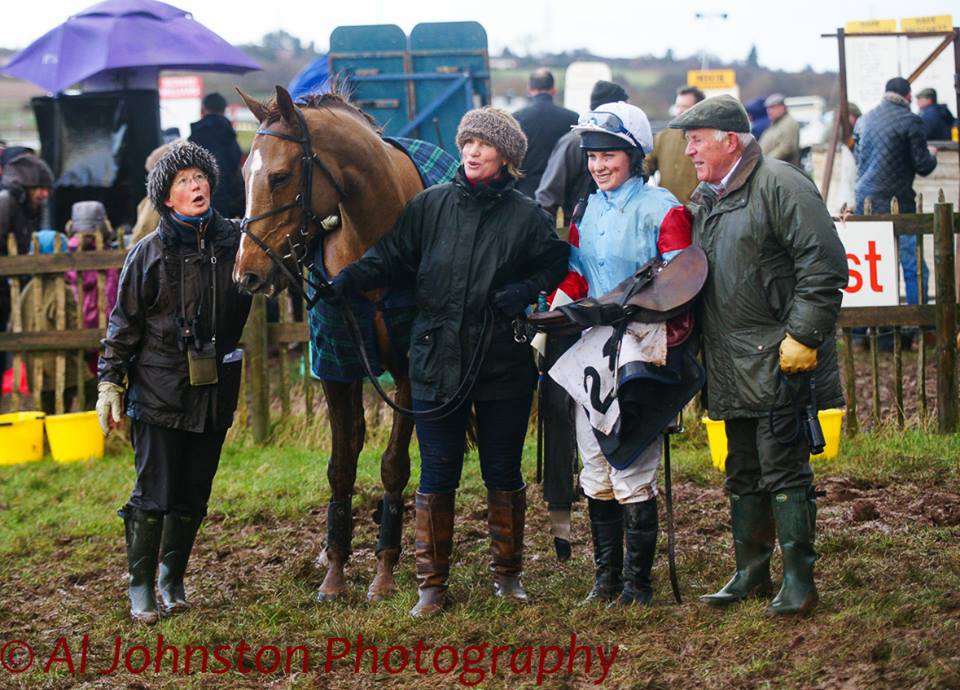 Before we left there was still time for AGA Championship favourite, Gina Andrews and Diana Williams (mother of reigning AGA Champion, Jane Williams) to model the new AGA bobble hats. Jane also joined in, striking a pose for the camera, before my afore-mentioned dodgy parking ensured we required the assistance of four hardy racegoers to push us off the course!

The early exit paid off as I made my 5pm copy deadline for Pointing Plus, and we also arrived dry for our lunch date! It felt like we had four seasons in one day with sun, rain, hail and wind, but where would you rather be? In the fresh air watching great racing, or on the sofa? What  great day, can’t wait for the next one!

Blazing sunshine at Chaddesley with a bit of a breeze! But were would you rather be? In the fresh air watching great racing or on the sofa?

2 thoughts on “Four seasons in one day as Chaddesley Corbett delivers a Christmas cracker!”

Durham born and bred, made my name as the AGA man, onto my next adventure. Love life, good food, gin, selfies, and Point-to-Point horse racing, also invented the AGA hat! View all posts by David Simpson - Here, there & everywhere!